More cushion foundations are landing in the UK! Yay. If you don’t know what they are by now, check out my cushion 101 post for the low-down. Cushions have been the trend for a good few years now in South Korea (where they were invented), and foreign brands have been catching on to the hype since the end of last year, as they start to release their own cushion foundations to bring to the Western market.

In the UK however, the cushion trend is taking its slow sweet time to arrive. The L’Oreal Paris Nude Magique Cushion has been released in America for a good few months now but it was only in April that it made its appearance here. I was so excited and surprised after seeing an advert for it, I rushed out to Boots the next day to pick mine up.

There is only one other cushion foundation available in the UK so far – the Lancome Miracle Cushion Foundation, but at £30, it was just too pricey to justify trying it when I have a stash of Korean cushions already and I didn’t have too much faith that they could replicate what makes Korean cushions so great (case in point: Western BB creams just aren’t as good as Korean ones imho). The L’Oreal cushion however, had a promotional launch price of £10, (originally £15), and a 3 for 2 offer on L’Oreal cosmetics. So I couldn’t resist and picked up 3 cushions for only £20 and gave one to my mum to try.

Compact cover differs in colour slightly depending on the shade

One thing to note; in Europe and Australia this is called the L’Oreal Paris Nude Magique Cushion but in the US, this is known as the L’Oreal True Match Lumi Cushion. They are the same product (just with different colour packaging), but for some reason, are marketed differently depending on region.

This product is described as a dewy glow foundation with SPF29, designed to give a fresh, natural and lightweight finish. This comes in 7 shades for cool or warm undertones. I have neutral to cool undertones beneath my surface yellow skin and ended up getting No.4 Rose Vanilla (cool) and No.7 Golden Beige (warm). Both are a decent match, with no.4 closer to my actual pale skin colour and no.7 bringing out the yellow in my skin more. It’s a little too dark but still wearable, especially as I get a bit darker in the summer. I think No.6 Rose Beige would have been the closest match for me as it’s between no.4 and 7, but they didn’t have it in stock at the store I went to.

Sticker seal has the shade number – the only indication of what shade you are. Why on earth did they not print it on the casing itself.

The packaging for this is plastic but light and compact for travel and throwing in your bag. It has a metallic pinky/purple case which scratches easily. It could be better, because it looks cheaper than it’s £15 value),  but it’s not awful either. (I prefer the rose gold version sold in America). I do have a big gripe about the stupid decision not to have the shade name or number anywhere on the packaging. The shade no. is on the sticker seal when you buy it but once you peel that off, there’s no way of remembering your shade so I suggest writing it on somewhere to remember –  if you want to repurchase.

Similar to Korean cushions, it opens up to reveal the puff applicator which sits on a plastic divider that keeps the cushion underneath from drying out and getting dirty. The only difference is that the case is not made for refills nor do L’Oreal sell cushion refills so when you run out you have to buy the whole compact again, which is a lot of wasteful packaging. It would have made sense to offer refills because it keeps cost down for both the company and consumers. 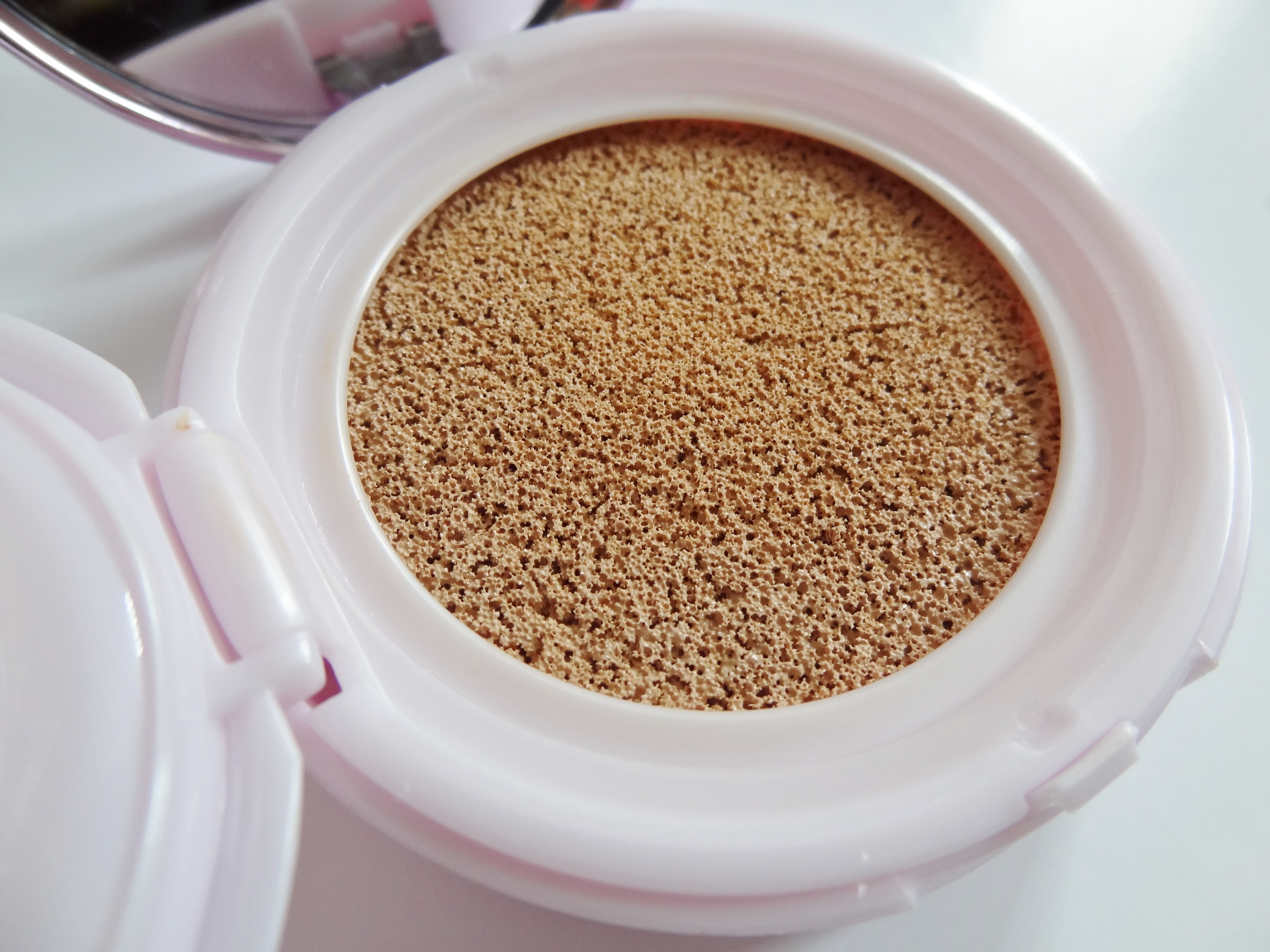 As you can see, the cushion itself isn’t exactly the same as the Korean versions. It looks a lot less dense and the pores are bigger which is why more of the liquid foundation tends to sit on the surface of the cushion when you first use it, rather than be absorbed within it.  (I’ve read some reviews that say the foundation spills out around the sides of the cushion if you have it stored sideways or upside down in your bag, and although I haven’t encountered that problem, it makes sense given the pore size). The cushion also feels less firm and dense when you press down on it. It is more similar to the stamp cushions that you find at the post office. I’m not sure if that makes it dry out quicker because I’ve only had it for 2 weeks but it does contain almost the same amount as Korean cushions – 14.6g vs 15g. Once you feel it starting to dry and pick up less product, you can flip the cushion over with tweezers to get more product out of it. 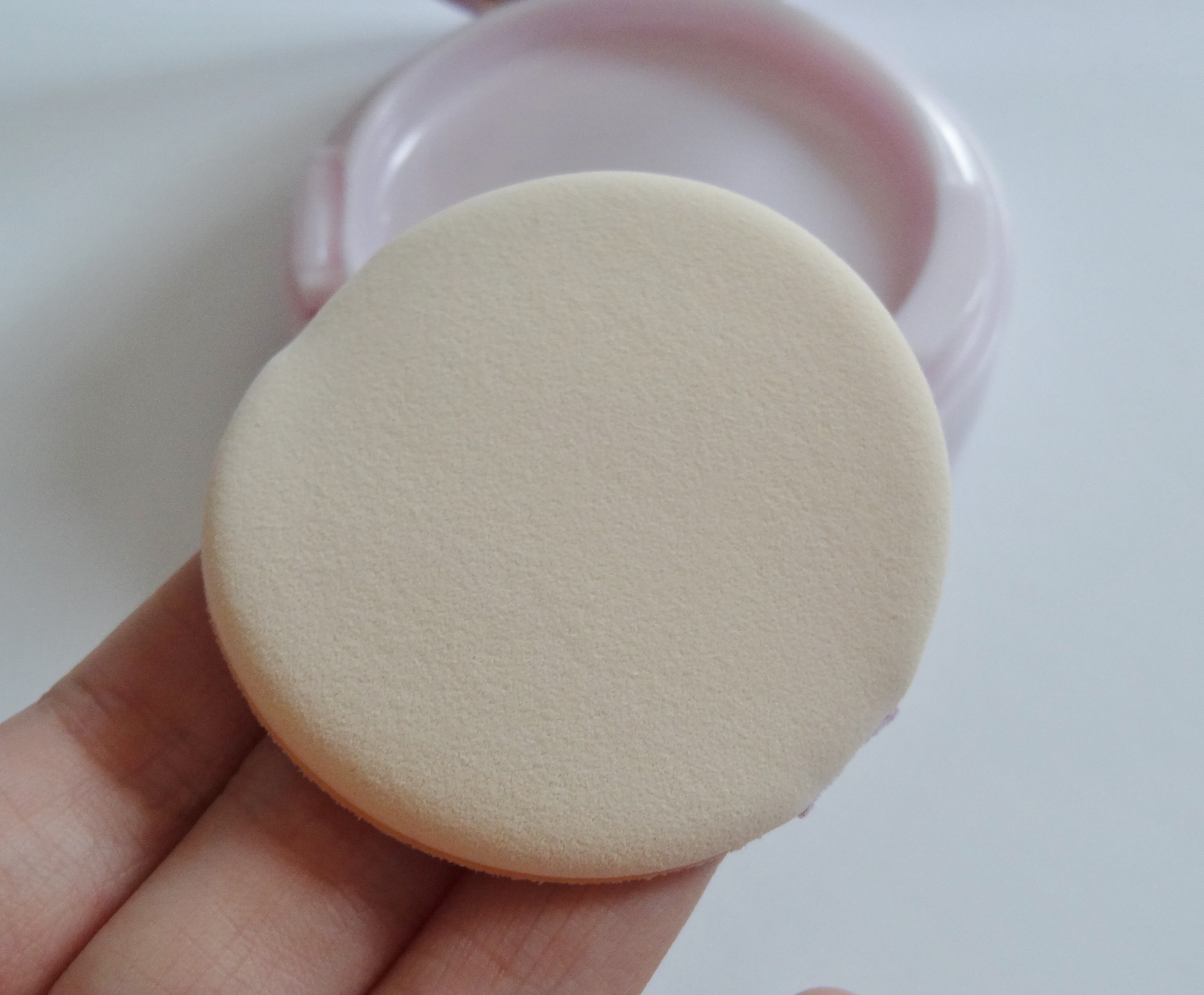 Puff is the best way to apply cushion foundations and provides a beautiful, even finish.

The best thing about cushion foundations is the way you apply it and this comes with a nice standard puff which is soft and flexible and helps provide a natural,  even application. You just press the puff down lightly on the cushion to pick up product and then with small tapping and patting motions, blend the foundation over your skin and build up coverage if you wish. 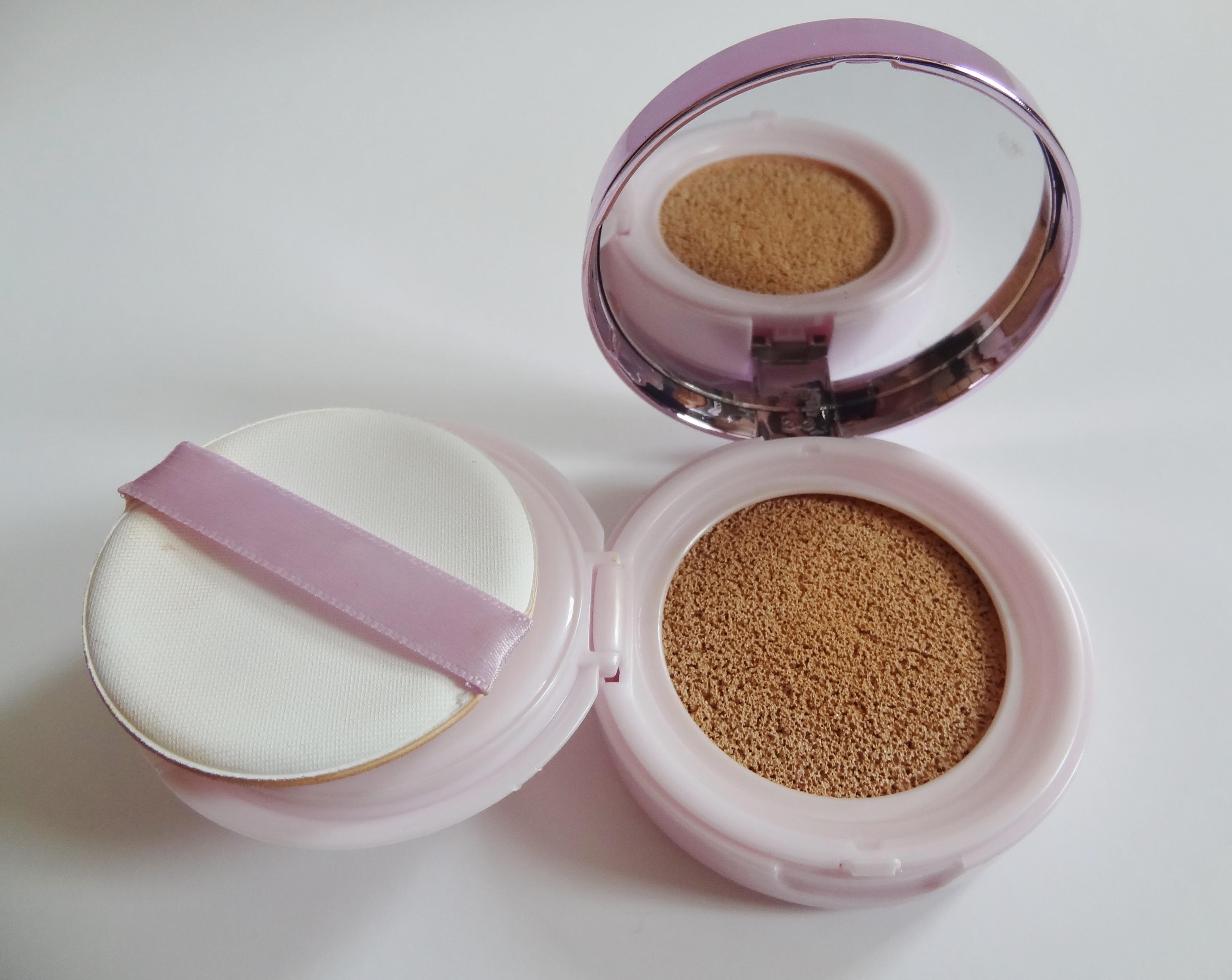 I have to say, I was surprisingly impressed with this cushion foundation. I wasn’t expecting much but it performs a lot better than I thought. This has light to medium coverage so it won’t cover major blemishes, but it will even out skin tone and create a very natural look. It has a cooling sensation when you apply, it blends so easily and doesn’t streak or cake up. It provides a lightweight, dewy finish and gives your skin a nice glow. It has a thin, runny consistency so it doesn’t feel heavy or clog your skin even when you build it up. It looks and feels like you have no makeup on which is perfect for everyday wear. It adheres to the skin really well, and is the closest thing to looking like natural skin. You can’t even really tell you have coverage; it doesn’t have that HD pore/skin blurring effect, it just evens out your skin tone and gives a smoother complexion. 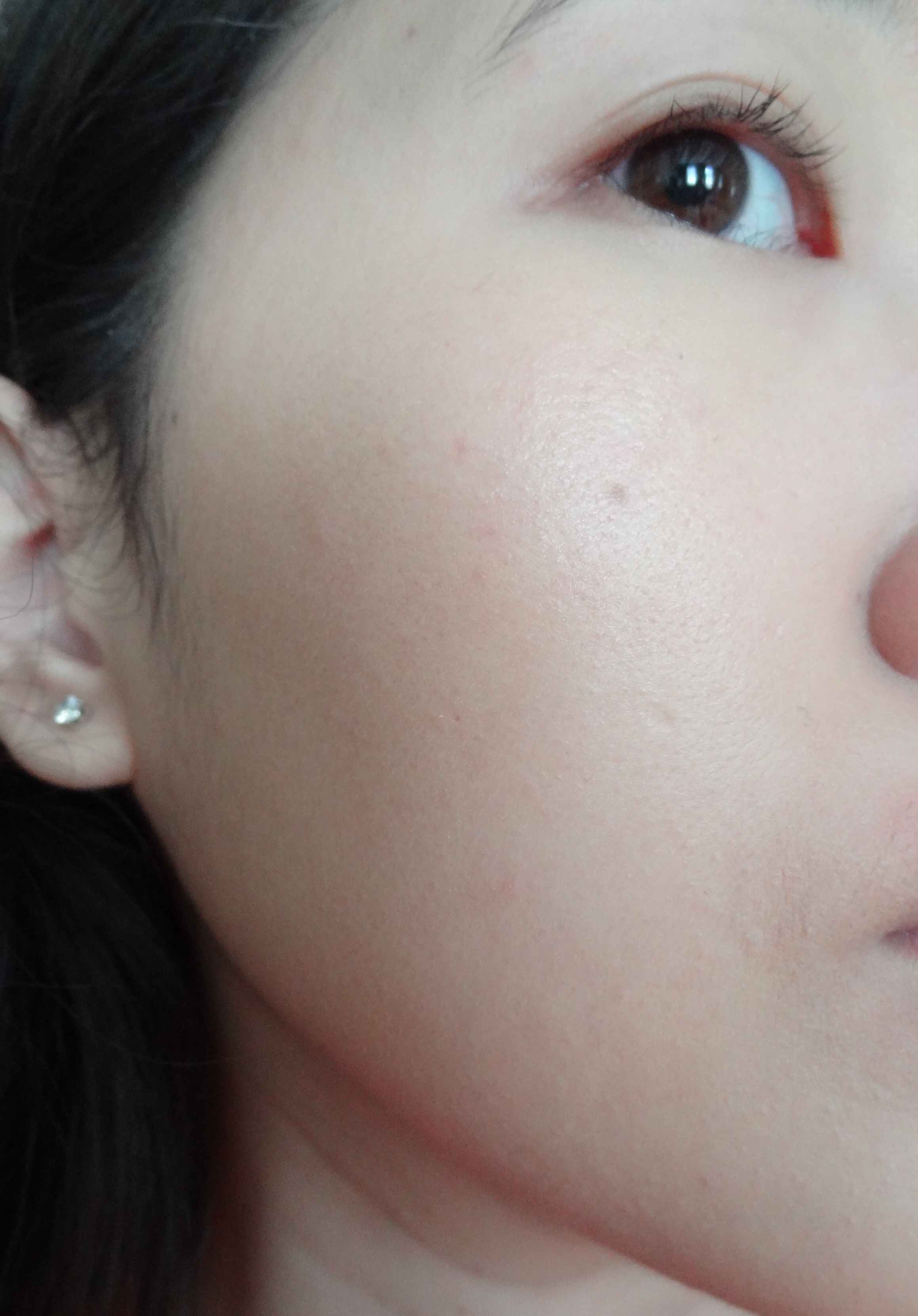 With no.7 golden beige applied. Very natural, light-medium coverage – you can still see a bit of redness peaking through without concealer.

For combo/oily skin, you probably want to set this with powder because it can look a bit shiny over your t-zone. I have normal skin (with an oily t-zone sometimes), and at the 3/4 hour mark, the sides of my nose get greasy, and it looks very oily. (Although to be fair, my nose gets oily with a lot of foundations). I usually powder over my forehead and nose when I apply in the morning just to take a bit of the shine away and keep the oil at bay for longer but I’ve found regardless of powder, it still gets oily quite quickly which makes me think a lot of the oil comes from the formula itself. If I wear this I do like to have blotting sheets with me so I can blot once in the middle of the day.

Also, I don’t recommend this if you’re doing a lot of outdoor activities as anything that makes you hot or sweat a little will make the foundation react with your skin and make your entire face look oily. I’d say this cushion is more suitable for the autumn/winter season but powder is your best friend with this foundation as it sits well over it, and you still have a nice satin finish.

Despite the oil issue I do like this cushion a lot because it has decent lasting power too. The coverage is still fairly good at the end of the day and doesn’t feel tight or dry on the skin; it does disappear more around my chin/mouth because I tend to touch that area most when I work, but overall it fades naturally and isn’t patchy. 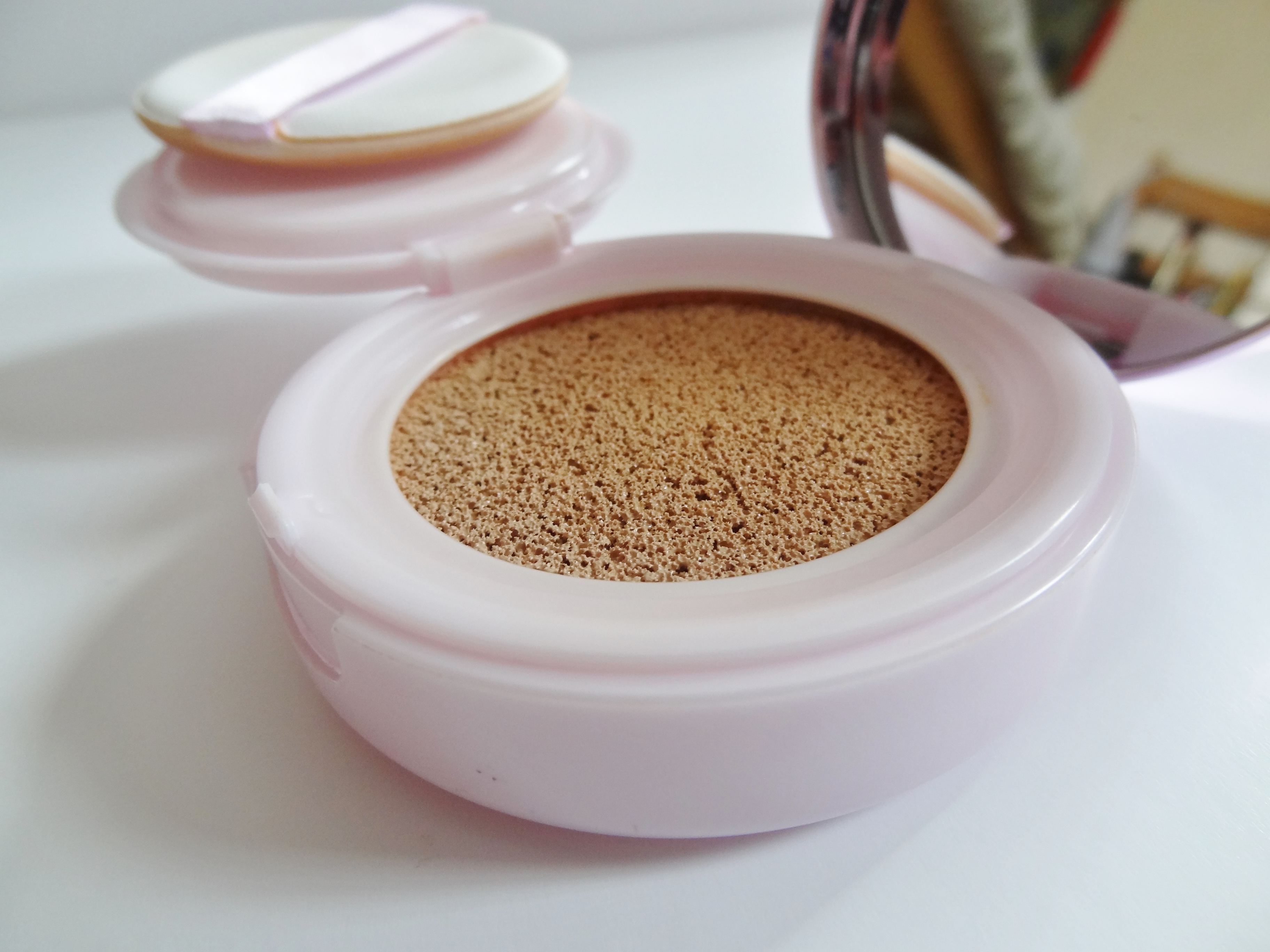 Overall, this is a really good everyday cushion when you want light minimal coverage. I even prefer it in some aspects to some Korean cushions because it sets quickly on the skin and doesn’t feel tacky to the touch or transfer easily like some of them can do. It isn’t as focused on the skincare aspects as Korean brands, but it is moisturising and does have some SPF. You might not like this cushion if you have very oily skin, have more acne/blemish prone skin, or are looking for high coverage but if you want a natural and light, dewy finish, and the no makeup-makeup look then I would recommend this. Not to mention how convenient and easy this is to use in the morning when you’re in a rush. I’m glad I purchased this and although I’m not sure I would buy it at the full price, I would if they are on sale or have a deal again.