The TonyMoly BCDation Cushion+ was released in the latter half of 2015 and I initially bought it because I had a sample of the BCDation+ – which is a regular foundation that comes in a bottle form –  which I tried and loved for the finish and long-lasting coverage. I can’t resist the cushion concept however, and since the BCDation Cushion+ promised to be the same as the regular foundation but in a cushion format, I decided to opt for this instead. Upon using however, this cushion is definitely not the same as the bottle foundation version which I’ll talk more about below.

The name BCDation comes from the product claim of having the benefits of a BB cream (natural light coverage), CC cream (hydrating like a moisturiser) and a founDation (flawless coverage). The idea of having flawless, lasting coverage yet being lightweight and hydrating sounds so appealing, but it also claims to provide whitening, wrinkle-improvement and UV protection (with SPF50+/PA+++). 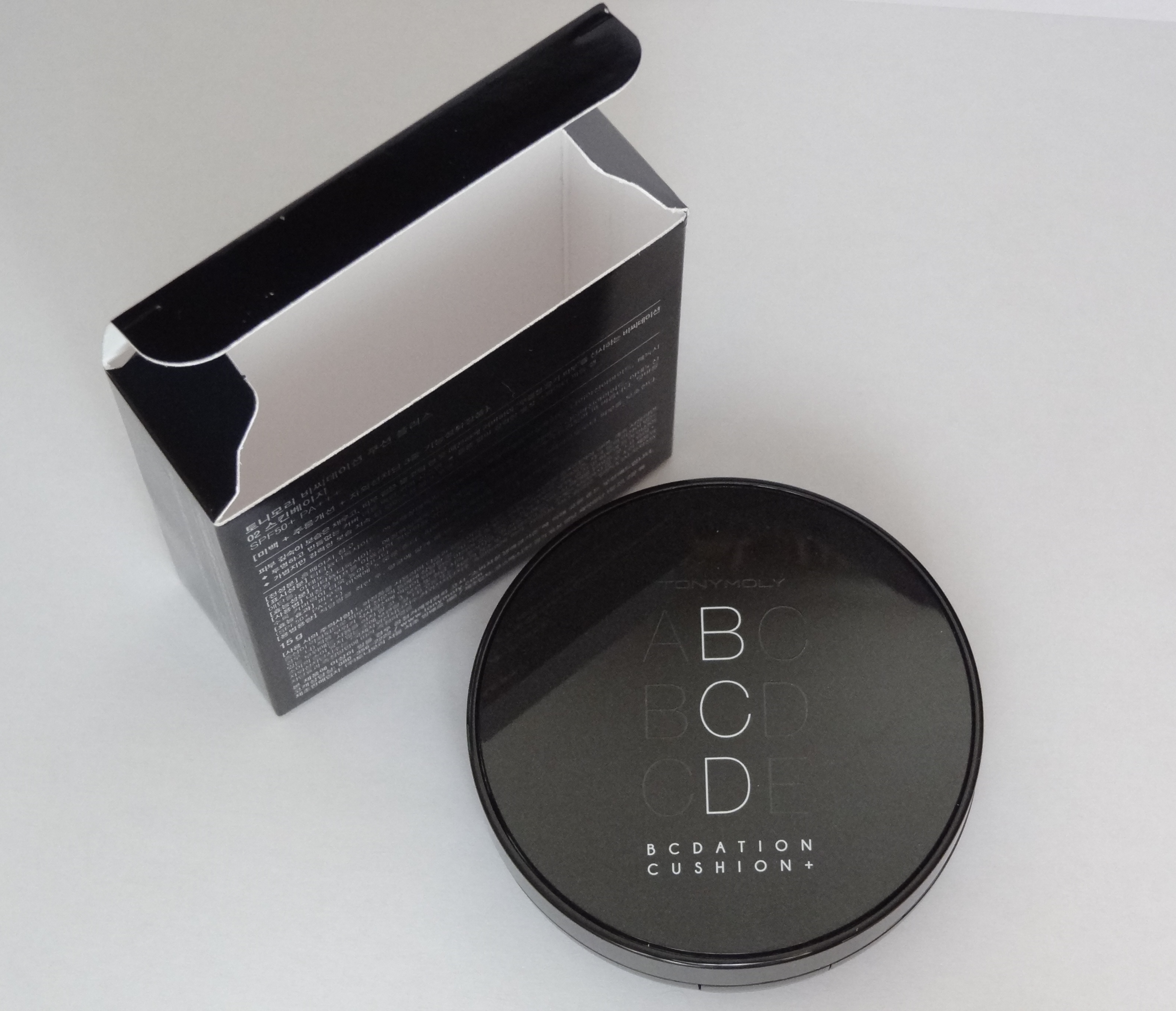 It comes in 3 available shades:

I bought this in 02 Skin Beige because my original BCDation+ sample was in 01, and it was far too light. These shades are like the equivalent of the usual no.13, 21 and 23; however no.2 Skin Beige does run lighter than other 21s so 03 Warm Beige would probably have been a better fit for me.

This is a much more affordable cushion from a roadshop/drugstore brand and retails for only KRW 19,800 which is approximately £12/$18. This does not come with a free refill but you can buy it separately which is cheaper and saves you having to buy another case when you run out of product.

TonyMoly refills aren’t interchangeable with other cushions as it is slightly bigger.

This cushion does have a slightly larger circumference than most other standard Amore Pacific brands like Hera, Laneige, Sulwhasoo etc, so unfortunately TonyMoly refills can’t fit into other brands and vice versa. However, the larger size does mean that the mirror on the inside lid is bigger, as well as the puff applicator.

I also love the packaging for this cushion which was another big factor in enticing me to buy this over the regular BCDation+. The white writing on black casing is sleek, clean and bold and looks classic and more expensive that it actually is. The case is as sturdy as the high end brands and has a good stiff hinge so the mirror can be slanted to any angle and extends flat almost 180 degrees. The lid that separates the cushion and puff also clicks shut tightly which I appreciate as so many other cushions don’t, so I always feel like I haven’t closed it properly. 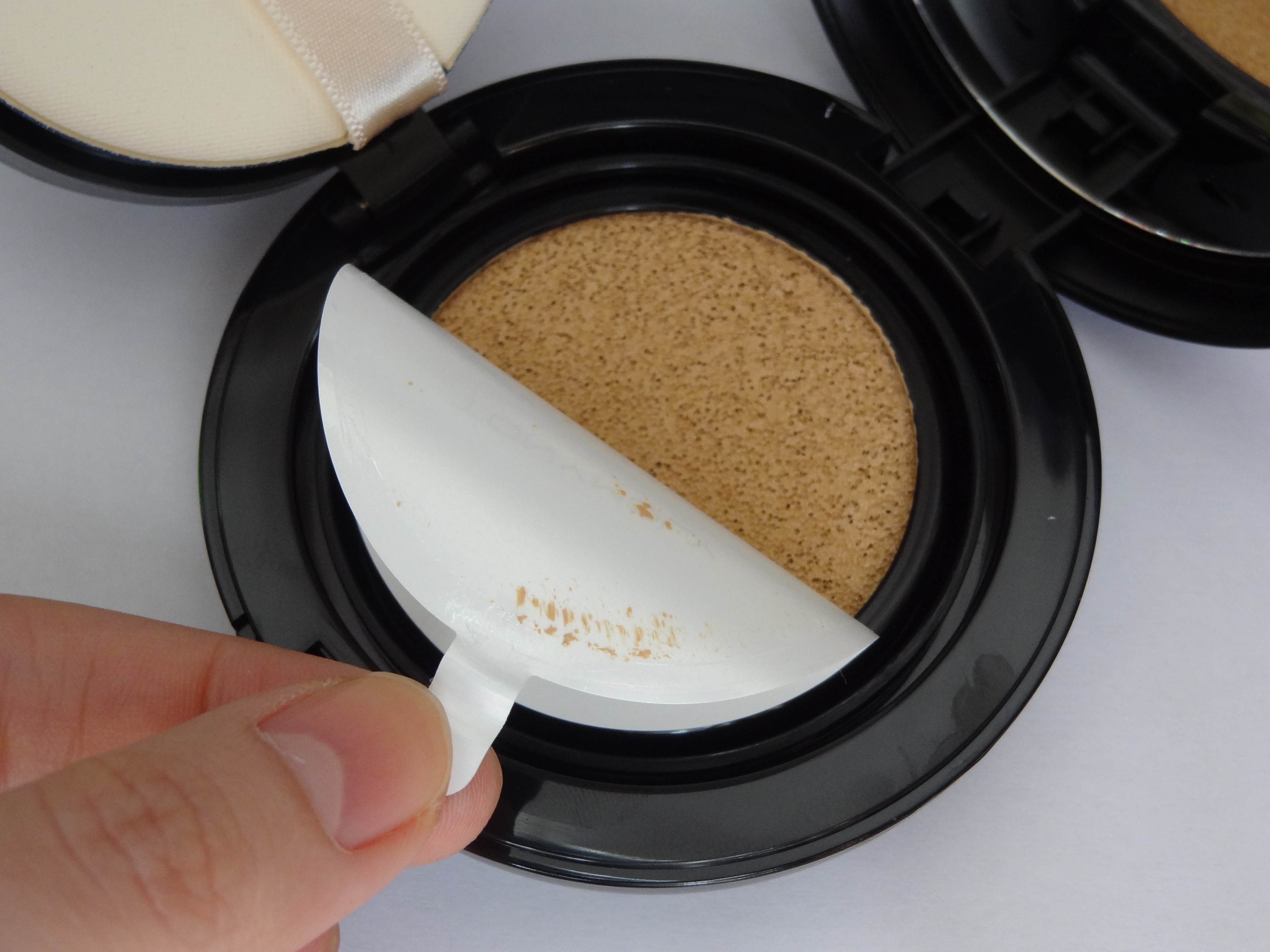 So I went into this cushion with high expectations that it would deliver as great results as the BCDation+. I mean how different could it be; is it not just the same foundation formula poured into a cushion? But no, the formula is definitely different – and not in a better way.

What disappoints me most about this cushion is the finish. The CBDation+ gave me high, even coverage and dried down to feel matte but with a natural/glow finish. This cushion does not make the skin look as flawless as the pigments aren’t as fine.

I find that this looks worse around my nose and mouth area. The foundation tends to bunch up and sink into the sides of my nose which looks awful. It also applies very streaky and I’m not sure if this is a combination of the puff and the actual formula but this takes longer to apply as you have to constantly go over the area you’ve already applied on to make sure there are no streaks. Despite this being a new improved puff which absorbs less product, I don’t like it as much as those from Amore Pacific because it feels more stiff and less flexible. 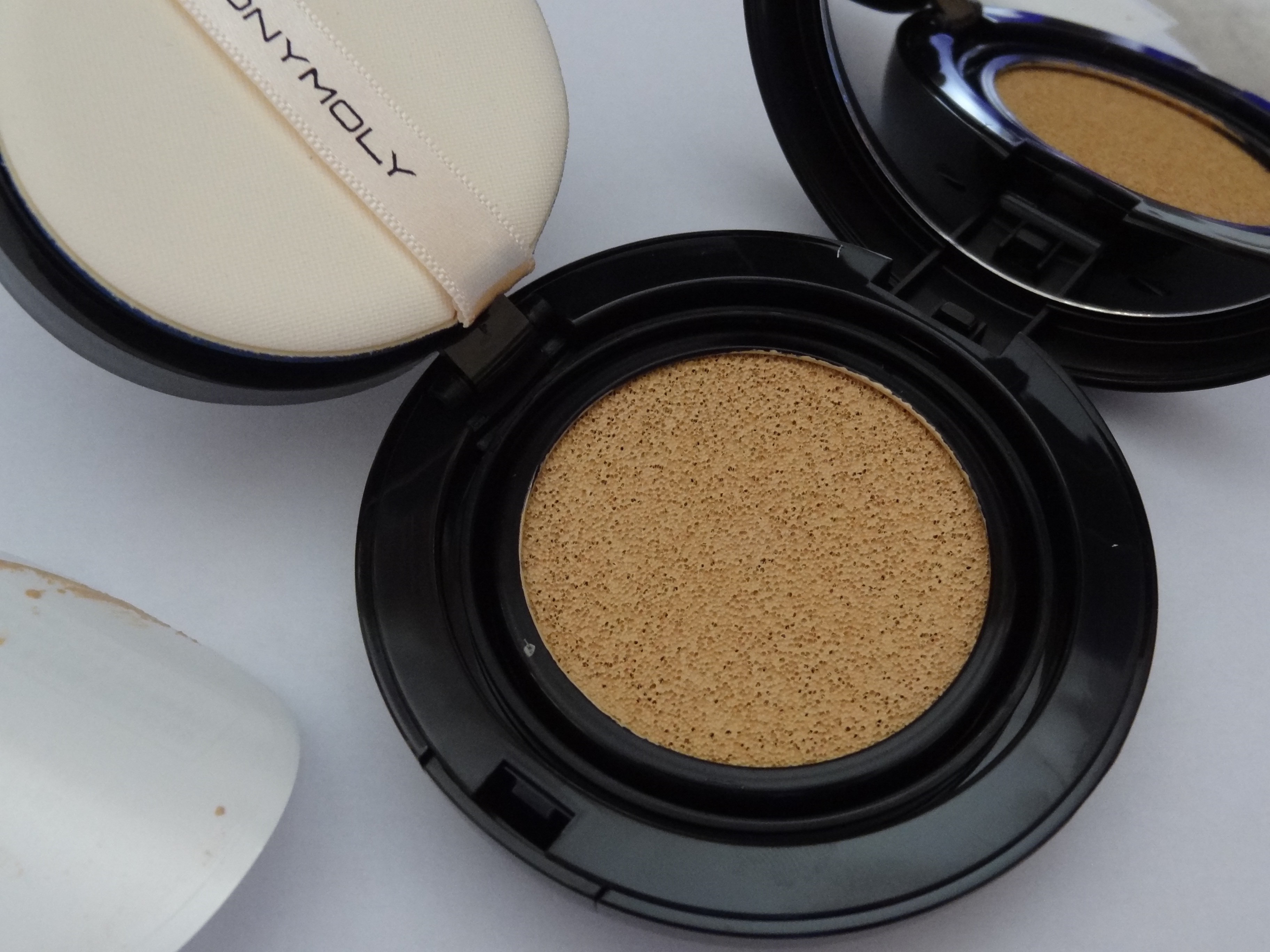 The cushion has a good high-medium coverage which can be built to a higher coverage with an extra layer. It feels thicker and heavier than some other cushions but not as much as a liquid foundation. I like this as I don’t need to use an extra concealer; my redness is covered up really well. It also isn’t too dewy/shiny and has more of a natural, semi-matte but glowy finish. When I first apply it, I wouldn’t feel the need to powder on my t-zone.

The problem with this formula is that it takes a very long time to set so it’s hard to apply other makeup on top without it moving and transferring easily. With the swatches on my hand, i ran a finger over them after 2 hours and the TonyMoly BCDation smudged the easiest and the most. Yet when I try to set this with a powder or setting spray, it almost makes the finish look worse. It doesn’t look as even or as smooth. (In contrast to the IOPE Air Cushion XP whereby the beautiful finish still comes through the powder). Also, my Missha cream contour blushers really don’t pair well with this, as it makes the cushion bunch up and start pilling around the nose and forehead area.

Also, when I opt to wear this with no powder, my nose and forehead start to get oily around the 3/4 hour mark which is one of the worst performing amongst all my cushions that usually hold up for a minimum of 5 hours at least. My skin is actually pretty normal at the moment but this cushion seems to make my nose oily which then makes the foundation very patchy. It also tends to settle into uneven skin, fine lines and dry patches if you have any and after about 8 hours it does start to feel just a little drying.

This cushion does have a scent which is very sweet and reminds me of gummy candy. I can’t smell it once it’s on my face but it is noticeable when you’re applying it with the puff.

Right after application, you can see the TonyMoly and Etude House run lighter than the other shades. 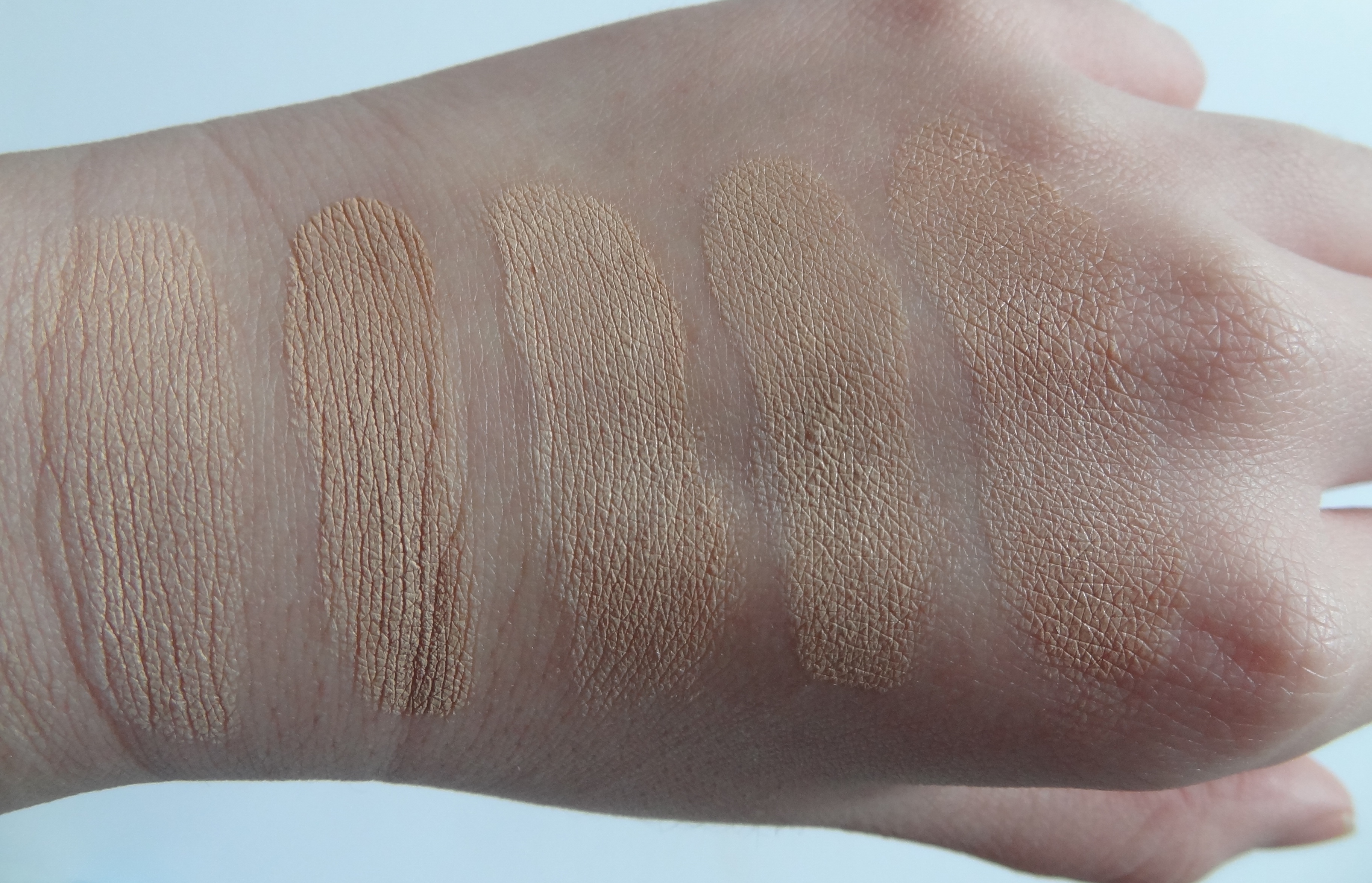 After 2/3 hours, both the TonyMoly and Etude House have oxidised to a similar colour as the Hera No.21. Etude House became darker within half an hour but TonyMoly took much longer.

As for the colour match, it isn’t completely accurate to its claim of being a non-darkening formula. The shade no.2 is a little light on my skin and I was willing it to oxidise – it stayed true to its colour for a good couple hours before it started to slightly colour match with my skin tone. Compared to the Etude House Precious Mineral Any Cushion, it definitely does not oxidise as fast.

This is by no means an awful cushion despite the quite negative review. It just doesn’t have the most flawless finish that I prefer, but it still evens out your skin tone well and provides higher coverage than a lot of other cushion. Its best suited for people who have skin that neither leans too oily or dry and you need to make sure your skin is well exfoliated and hydrated. If you’re someone who touches your face a lot throughout the day, you’ll find this won’t be very long lasting. It will transfer and create streak marks if you so much as itch your face with a finger. I have a habit of leaning my chin in my hands when I work so by the end of the day, the coverage around my chin and mouth area has worn off significantly. Then again, cushions are made for touching up throughout the day – I just never do. I won’t repurchase this when I run out only because there are other cushions I prefer over this, and I’d rather get the regular BCDation+, but for the price it is a decent cushion compact. It just isn’t comparable to the formula you pay for more high-end cushions.